Once a Level Map has been created, people can be added to it so that other users are aware of that person's location. There are three ways that a person can be added to a map: a direct addition to the map, adding the person to an asset through the map or by editing an asset to have an allocation for that user.

Adding a person direct to the map:

Only Administrators are able to add, edit or remove people from a map. Browse through the Location Tree until the Level location is selected. The pencil button appears next to the map control buttons which are available to all users. 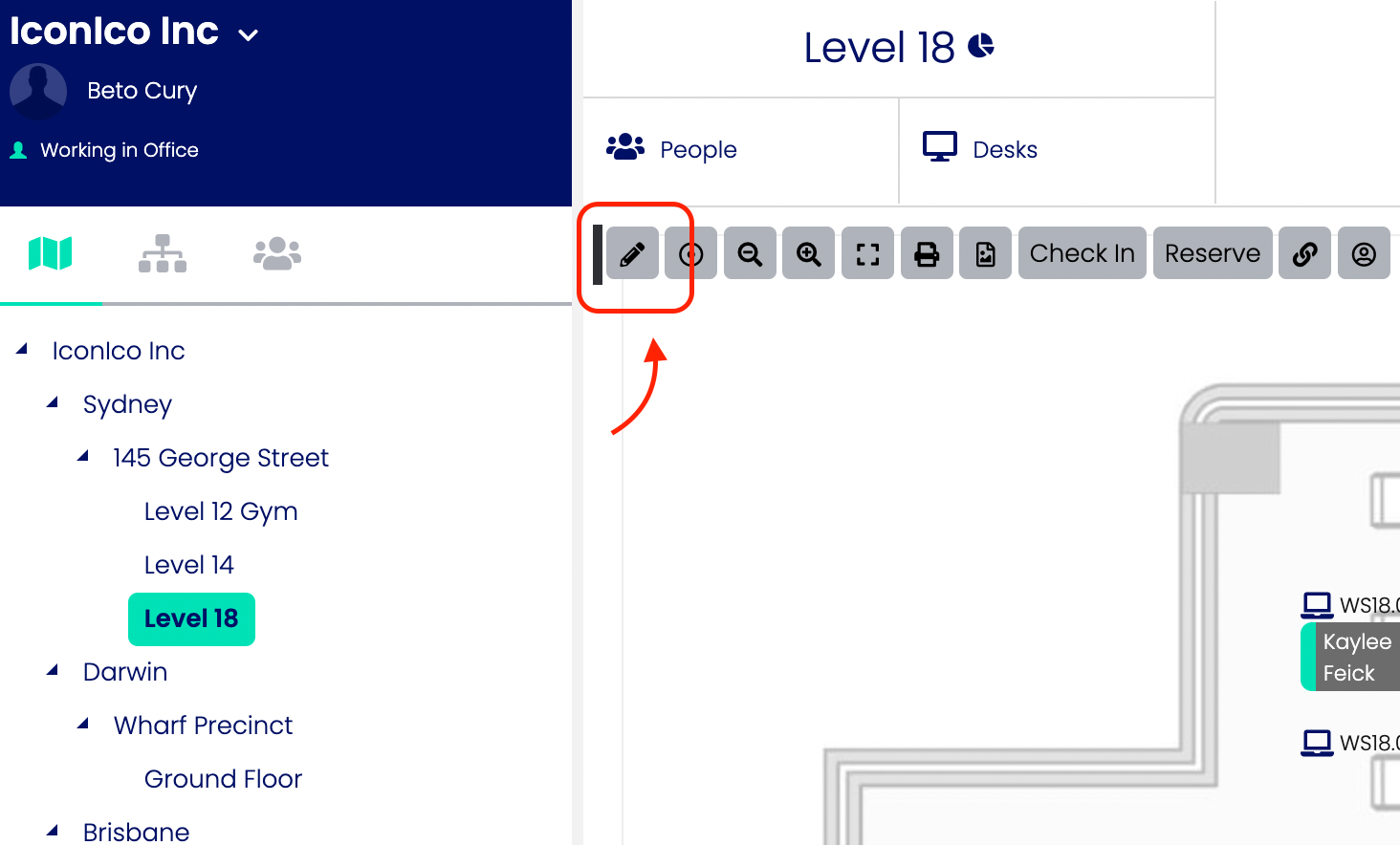 Clicking this button enters edit mode which displays a number of objects that can be added to the map (People, Assets and Pins). Select the icon that resembles a person to choose People. 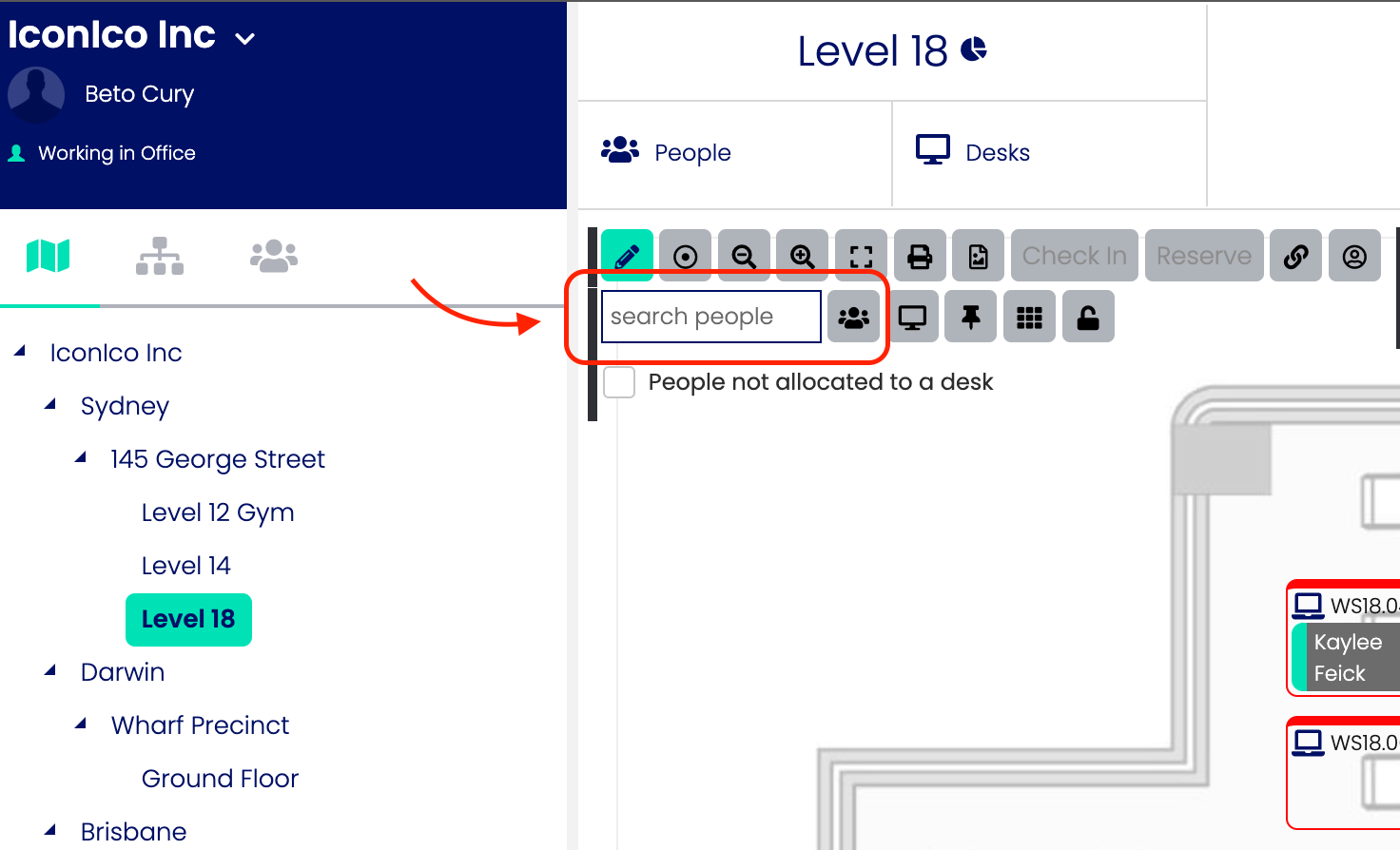 A box will appear prompting for text that matches the name of the user to find. Enter characters here to display all people within OfficeMaps that match this sequence. The people icon button will also change to an image of multiple people. Click on this button to show all users in OfficeMaps instead of those that match the values entered. In addition, checking the box People not allocated to a desk will restrict the list further to only those users who have not been assigned to an asset already. 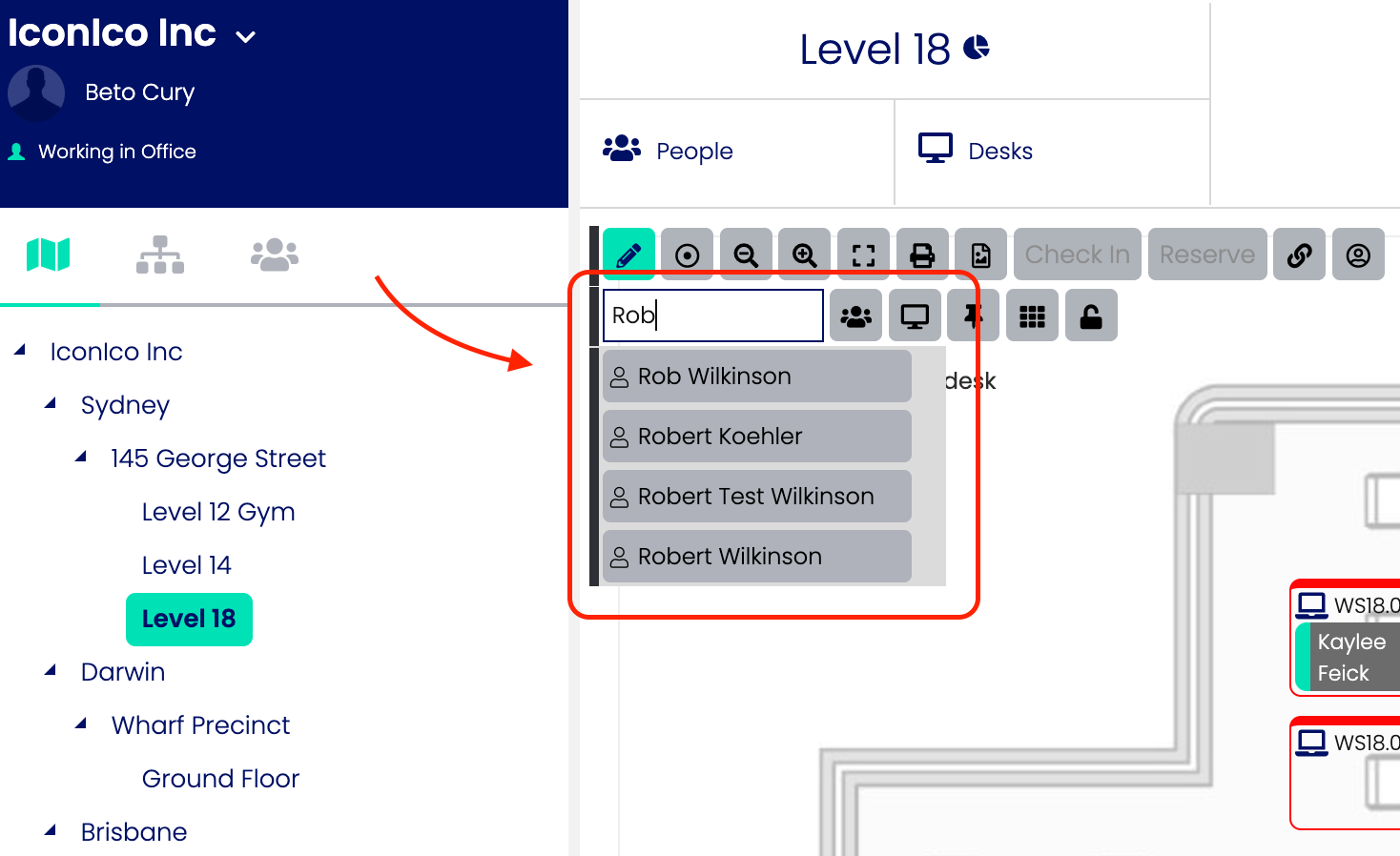 If an asset type has been specified as a default as described in the article Adding a new Asset Type, you can select a person from this list and drag it to a desired spot on the map. The user will appear on the map assigned to a new asset of that default asset type. If no default asset type exists, attempting to drag a user to the map in this way will not be possible. 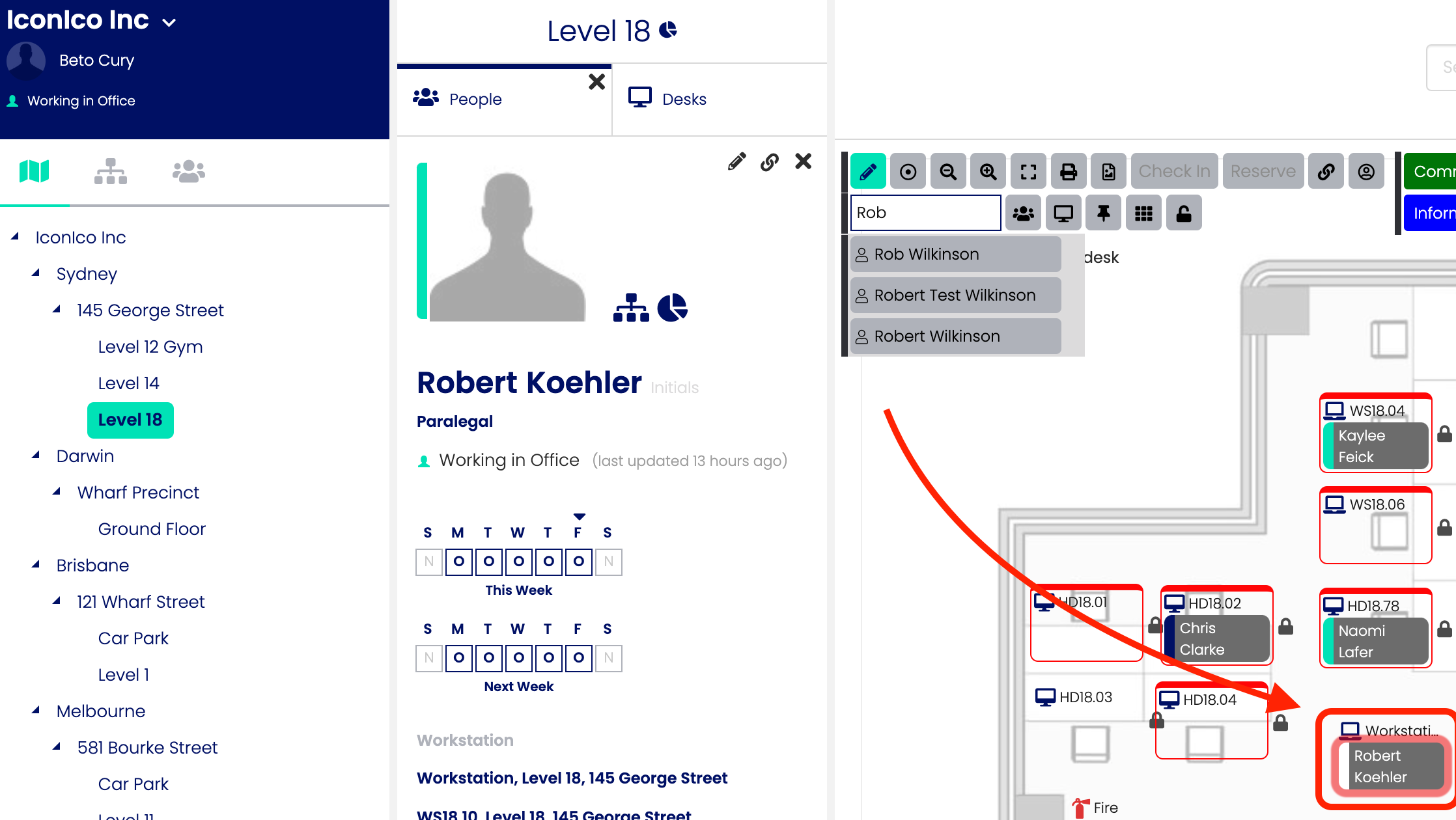 Adding a person to an asset on the map:

Another method to add a user to the map is to add them to an existing asset. Select a person from the list as described above, but instead drag this user onto an asset on the map. The user will then appear on the map assigned to this asset.

When a person is added to a map, details of that person appear in the People Panel. If desired, changes to the person can be made by editing them as described in the article Viewing and Editing People in the Desk Panel. Repeat this process as many times as needed. When finished, click the pencil button again to end editing mode.

The final way to add a user to a map is to edit an asset on a map and allocate a user to it. Select an asset on the map and edit it as described in the article Viewing and Editing Assets in the Desk Panel. In the field Allocations, add any number of users you would like to add to the asset and then end editing mode. These users will appear on the map assigned to this asset. 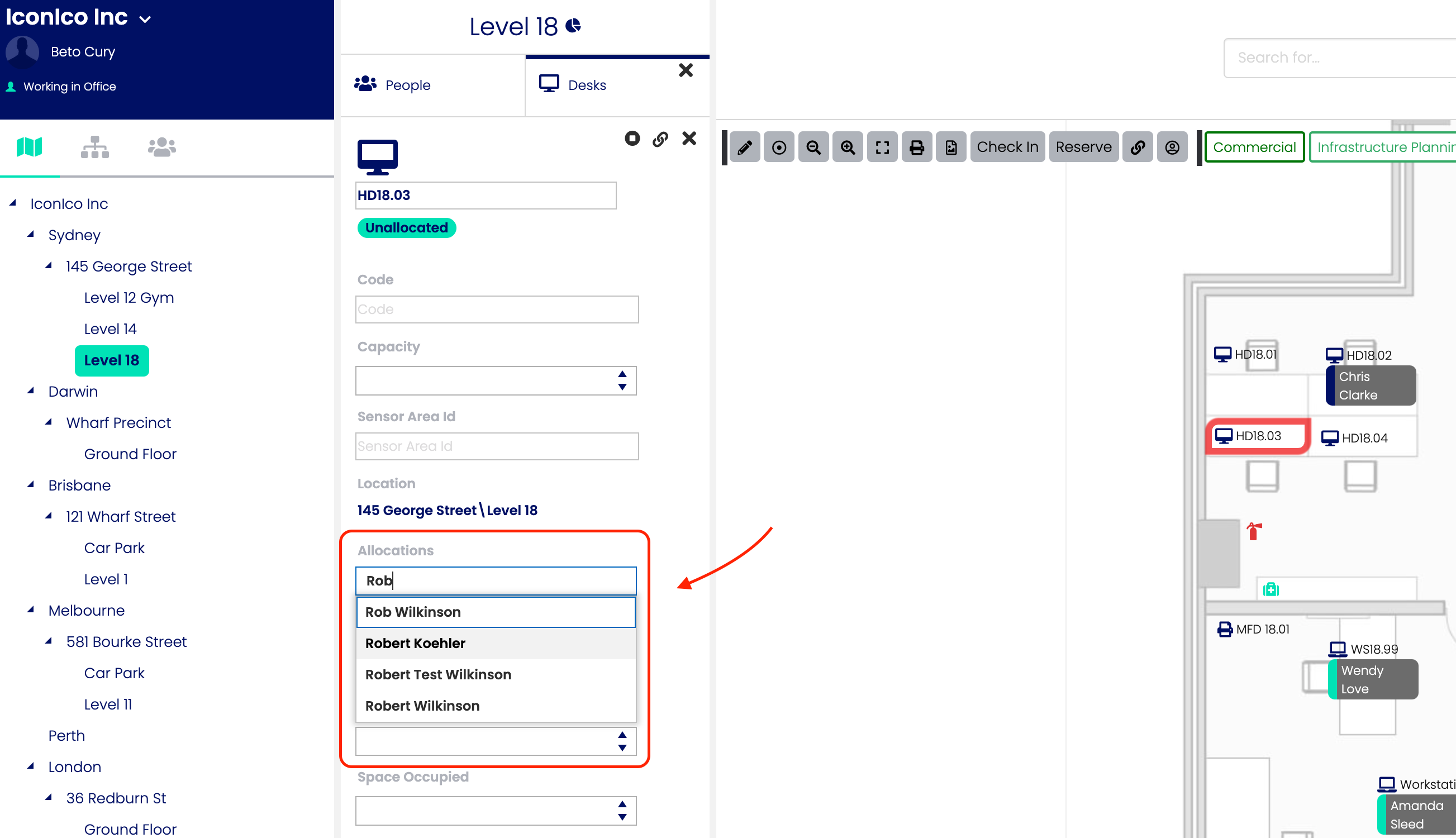 ​
Adding a person to an asset will cancel all existing reservations that may have been made for that asset.